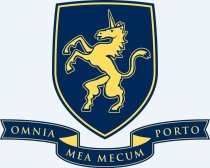 "Omnia mea mecum porto"
or : ‘I carry all my things with me’

The origin of the motto: With a little derivation from the well-known structure these wise words had been cited by one of the most famous preachers of the Roman Marcus Tullius Cicero (B.C.106-44) in his work entitled Paradoxa (I.1.8.: Omnia mecum porto mea). However, Cicero had translated this phrase from Greek to Latin.


Who was Bias of Priene?

Bias was known in the ancient times as one of the Seven Sages of Greece. Although the identity of these seven people is not obvious Thales from the field of mathematics and Solon from the field of history always belonged with Bias to the Seven Sages. About these sages many fabulous stories had been told which might have only a tiny relevance to history.  Some phrases are traditionally connected to them only because they themselves became legends and thus some phrases of  unknown origin became famous.
It is sure that Bias came  from a noble family and the heyday of his youth was in the middle of the sixth century B.C. His origin is important because it defined Bias’ political views and his philosophical pursuit. Priene lies on the opposite coast of the Aegean Sea in Asia Minor. The land was populated by the Greek Ion tribe. Philosophy’s first scientists originated from these coast dwellers that travelled far and wide from the curious Ion natural philosophers.  But from the beginning of the sixth century B.C. the Greeks who lived here lived in the shadow of the spreading Asian empires.

When did he say this phrase?

The birth of this phrase is due to this historical state. According to Herodotus’ description (Greco-Persian Wars I.170.) when the Persians threatened the Ion tribes and it seemed that they had to face servitude. Bias suggested to the Ions gathered in Panionium (gathering place for all the Ion cults) to abandon their birthplace to the island of Sardinia where they could establish a strong and common city state.  Home is not for sale so the Ions gathered rejected Bias’ idea and held fast defending their homeland. The Ions in Asia Minor were helped by their fellow countrymen  from Athens too. The victory over the Persians led to the solidification of the Athenian democracy and of the western culture. In Asia Minor there had always been a major number of Greek population until the end of World War I. when the Turks chased them away.
However Bias didn’t leave his fellow countrymen not even after the rejection of his suggestion and took part in the fights. He cited Cicero’s words when the Persians granted free withdrawal  to the besieged ones and moreover anyone could take as much of his properties as they  could carry in their  arms. Bias walking by the line of enemy soldiers in contrast to his fellow countrymen had his hands empty.  When asked point-blank why he had not taken his most beloved properties he answered: ‘Omnia mea mecum porto’ or ‘I carry all my things with me’.

How and when do we use this phrase?

Bias’ ‘all my things’ was the knowledge he gained over the years and with that he had the opportunity to make his living even in the circumstances most dire. After the homeland this is the most valuable treasure one could ever possess and losing it is even a greater loss than the loss of mundane wealth. The education at our high-school is similar to this. It tries to provide students with knowledge that spans lifelong so everybody is able to make their stand out in real life.